Jesus is Your Strong Tower

Jesus is Your Strong Tower

The name of the Lord is a strong tower; The righteous runs into it and is safe.
Proverbs 18:10

In the Old Testament, strong and tall towers provided protection and safety. Anytime there was danger, the people of the city could run to the tower and find refuge.

Jesus is your strong tower. When you feel attacked, unsafe, or afraid, you can run to Him.

1. It is a place of refuge. A strong tower was a place of safety when an enemy attacked or any danger was present. Jesus is your refuge. Never be afraid to run to him in your daily spiritual battle. If you are afraid, run to the strong tower of the Lord.

2. It was a place of security. The tower provided a stronghold against the enemy. When an enemy attacked, the tower provided a strategic advantage in the battle. You have the King of glory on your side and dwelling in you. He has empowered you with spiritual weapons. Can you ever be afraid knowing God is ready to defend and protect you?

3. It gave direction. The tower was often the highest point in the area. It provided a point of reference. You always knew where you were, based on the tower’s position. God’s presence in your life is the anchor for your soul. As long as you stay close to Him, you are protected from the lies and deception around you. The Word of God is your point of reference when you face uncertain times. Look to Jesus, and He will show you the way.

4. The tower provided oversight. A watchman was placed at the top of the tower to guard the city. From his vantage point, He could see enemies or dangers coming. He could watch over the people and see those who were getting too far away. Jesus is watching over you today. He draws you back to Himself when you stray and is never surprised by the struggles or difficulties you face.

When you feel like you just can’t take it any longer, run to the strong tower of the Lord. He will protect and empower you.

Look at that promise again.

The name of the Lord is a strong tower; The righteous runs into it and is safe. – Proverbs 18:10

Jesus is your strong tower. When you run to Him, he becomes your refuge and security. He gives you direction and watches over you. When you are in need, run to Him.

I am excited to announce that we are celebrating this ministry’s fifth anniversary. Five years ago, God spoke to me about starting a ministry encouraging prayer and spiritual renewal.

It’s been an amazing five years of seeing God do so many incredible things. I began the ministry with a daily email program teaching men how to pray for their wives. I was overwhelmed as thousands of men across the country and around the world began signing up. I followed that with a program for wives called Praying for Him.

Fast forward five years, and almost 60,000 people from 213 countries have gone through one of these prayer guides.

The Daily Promise has been listened to over 370,000 times and is listed in the top 3% of all podcasts worldwide.

We need $50,000 in support before the end of the year to help launch the Praying for Pastors and help finish the year strong. 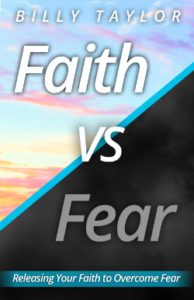 For everyone who makes an anniversary gift to the ministry, I will send you a teaching I just put together called Faith vs. Fear, releasing your faith to overcome fear.

Right now, we are being bombarded with fear-filled messages about the economy, the potential for war, when the next pandemic may come, and the list goes on and on. I know Satan is working overtime to lure God’s people into living in fear.

Again for everyone who makes a gift to the ministry, I’ll send you a copy of the eBook and the audio version of Faith vs. Fear.

When you are under attack, do you run to Jesus? (Share in the comments below)

Get The Daily Promise Every Day. It’s Free and Easy! Sign up Now.